Tim is leading the Octavia Cup with a double win

The first race of the Skoda Octavia Cup was held at the Hungaroring, where the racers needed to participate on two races. The first one on Friday, and the main race on Saturday. Through a very hard struggle, Gabor won the first race. The one and only Hungarian racer dominated the first contest, but the Czech Tomas Pekar, who is one of the greatest touring car driver in his country, pursued Tim until the chequered flag.

Gabor Tim started from position 8 on the main race on Saturday. He took the „indy start” amazingly, and found himself 3rd at the first turn. He also gained one position through the first lap, and after it, he overtook Rzepecki on the first braking point, in lap 2. 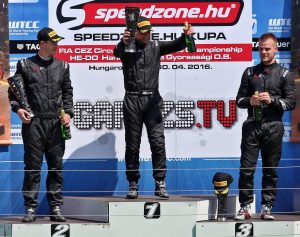 Thereafter it seemed that he’ll conquer confident, but his car lost some power, and he was 1 second off the pace, compared to the first race.

Tomas Pekar noticed it, and put maximum pressure on Gabor, but he can’t found place to overtake him, so Tim won the main race.

Currently Tim’s leading the table with 14 points. The rivarly will continue on Red Bull Ring, in two weeks.

„ We had a really good weekend, although it wasn’t as easy as it looked like from outside, I could say, these two races were one of the hardest in my carreer so far. I was truly on the limit on every inch of the race, because Pekar was really fast. On Friday we were on the same pace, but on Saturday he was faster by 7-8 tenths. To be honest he did the same laps as before, and my car was off the pace. The engineering team is currently working on a solution, and they’re trying to find out what happened. My car was really good, but it was only a ’B’ version. We hope that the new upgrade pack will arrive until the next race, and thereby we’ll have more power. The championship will be really hard, but my team going to give me a well prepared car, as they did on the first round. I’m looking forward to the next race on Red Bull Ring, this venue is one of my favourites.” Summarized by Gabor Tim.

The standings after the first round (Race 1&2)