The season started with three podiums for Gabor Tim 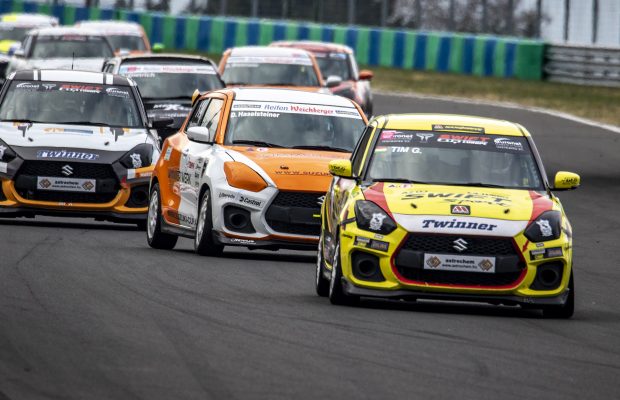 Gabor Tim won the FIA Swift Cup Europe International series in 2020, so this year defending the title can be the only option for him. The competition for the six-time champion was made more difficult by new teams and new pilots on the first weekend at the Hungaroring. The reigning champion took the podium in all three races, finishing third and two seconds.

Gabor Tim was not up to a good start in the 2021 season. In the time trial of the championship starting at home ground, he failed to go for a good lap for the first shot, so he could only improve at the last minute. His best lap was enough for fourth place.

”In these tires there’s only one quick round. So your first round is good, after that the tire starts to slow down, following that you can go constant rounds. Our budget doesn’t allow us to train with new tires and refine our settings for them, so I go out a little blindly every time for the trial. It was the same now, I didn’t do well on my first round, it got me 8th or 9th position. So I had to wait until the end of the training and try again. Luckily I was able to improved and it got me to the 4th position. ” – said Tim after the qualification.

At the first race, held on Friday Tim improved a lot so he attacked Adam Lengyel at the third position. Their duet was able to close up to the lead, Max Wimmer. However, the race for the first position was delayed due to an accident, and then the race was flagged down altogether.  Tim finished the first race at third position.

”We still had 2-3 rounds from the race. I don’t know what the race would have been like, but I felt I would have the pace to improve my position. Unfortunately the accident looked very frightening, so the red flag was legitimate. They didn’t restart the race, although there would have been three more rounds. That’s too bad, though I scored important points with the podium.” – Tim summed up the first race.

The second and third races were held on Saturday. Tim decided to risk and made significant changes on the car’s settings. On the second round he started from 6th position and got up to the second place, where he was flagged down. On the third round the first eight position switched on the grid again, so he started from 7th position. Red flag played the lead at the race again. Due to another serious accident the race stopped, but they restarted it, only six minutes remained. Tim took the second position at the last round’s last turning.

”It was hard to get ahead on the second race, but finally I managed to succeed. By the time I was at the second position Dominik Haselsteiner was leading. I did cut back on my fallback each round, but I did not stand a chance to catch up on him. The changes made on the car’s settings were positive, it was faster. I was satisfied with the results! By the third race we put on the remaining tires, it did not change much. A lot of us were using these tactics. Unfortunately, the red flag took a lot of time from us. There were 12 minutes left from the race when they stopped it, after the restart we only had 6 and a half minutes. I do not know where the time in-between went. I was able to overtake at the last turning and I got up to second place. But something was missing. I had a chance to go for the victory on this race as well. It’s all the same; three podiums and the second place in the championship is not a bad start.” – Tim analyzed the second and third race.

The championship continues at the Red Bull Ringen in Austria, it is one of Tim’s favorite fields. He won several times at the Austrian location.

” This year is going to be much harder, than the previous one. The M1RA, Norbi Michelisz’s team is very strong, not only the pilots, but the background is also professional. Even Adam Lengyel is a very strong opponent, he is going to race with Bendegúz Molnár by turns. Obviously my last year’s rival Dominik Haselsteiner and his team is also very fast this year. At least 5-6 pilots have a chance to win the championship title, so every point and every position is very important. I already love this season, whatever it is going to bring, this gives serious motivation for the next round.” – Tim summed up the weekend