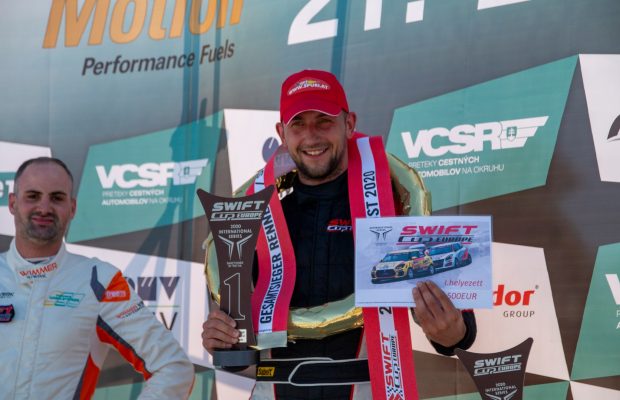 The news just came in July; after a 4-year gap Gábor Tim is once again pulling on the track racing uniform. His returning was a great success on the first weekend of the international Swift Cup Europe series on Salzburgringen in Austria; he won two out of three races. Therefore the multiple championship winner arrived on the second race weekend to Slovakiaring already leading the tournament.

Good news that despite of the coronavirus crisis, a wider field entered the second race. 22 cars were lined up on the grid, including 14 turbo versions that Tim was also racing with.

During the weekend, heatwaves made the racing harder, especially for the tires, they were wearing out quickly. Since the number of the usable tires are limited, it was a great deal how the drivers store their hoops. Tim decided not to force the best lap time in the time trial, he only completed one lap, which was enough for the 4th place.

„I didn’t wait around for slipstreams, I wanted a clean lap, looking after the tires. I made it. The others in front of me took advantage of the track’s givens. They pulled each other in the extremely straights. There’s nothing wrong with 4th place, it’s easy to overtake on this track. „ – said Tim after the time trial.

The tactics came in, the fresh tires made it through the end of the first race. Tim hunted down his opposers one by one but took the lead only during the final round.

“My opposers are faster on this track, than they were on the previous weekend. It wasn’t easy to overtake. I knew if I overtake too soon, they come back from slipstream. So, I waited until the last lap with the final overtake, it all worked out well so I was able to win the round. “– said Tim after his first victory.

Several attendances put up new tires for the second race, but Tim didn’t, he stayed on his worn-out ones. The conversed grip meant the 8th pole position for him. He got forward step by step, but by the time he got behind the 2nd racer, the leader Dominik Haselsainer already drove out a huge advantage. However, Tim couldn’t fight for the 2nd place due to a clutch error he slowed down during the last round and saw the chequer flag at the 5th place.

“I already saw by the middle of the race that first place is gone. The others had extra grip on the new tires, the overtakings took too much time. I tried to catch up to 2nd place, when the clutch’s oil popped, and I got stuck in fourth gear. Luckily I had enough virtue, that I didn’t go lower place than 5th. “ – declared Tim after the second race.

The repeated conversed grip and former fifth place resulted the 4th pole position. Tim got new tires on the first axle this time, so he could start this round with fast zest. He took the lead fast and reached the finish line with more than a 3-second virtue.

„This time we used different tactics. I wanted first place’s fate to be decided quickly and wanted to drive out a safe virtue, so I don’t provide slipstream. This was achieved by the end of the second round. Though Dominik behind me was able to come close a few times, I always had a response for him, and he wasn’t really a threat. The car was really good, I thank the whole team for the perfect job and the whole weekend. With my main sponsor we created a social support package before the weekend, I would like to thank everybody who bought the support package and would like to dedicate these two victories for them.  – said Tim happily after the third race.”

The field of Swift Cup Europe does not have much time to rest, the tournament will continue on the 4th-6th of September at the Brno lane in Check Republic.