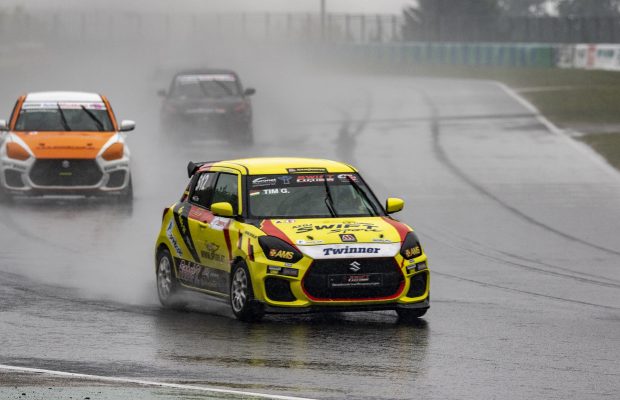 Tim Gábor returned to track racing this year in the FIA ​​Swift Cup Europe to prove his talent again. With the new 1.4 turbo cars, he performed in the FIA’s international evaluation where he compared his skills mainly with Austrian, German and Polish drivers. This season, the cup field has encountered in a total of 14 races at five locations, Tim stood on the podium at almost every round and won half of the races, seven times. In the end, he won the championship with a 33-point advantage.

Gábor Tim, a driver from Vanyarc, has already won five championship titles in his career, he achieved his greatest success so far in 2016, when he won the Skoda Octavia Cup with a big advantage, it was the first international championship title.

After 2016, due to financial problems, he first took part in the MARB races with his own car (now called Rally3), where he won the championship of the northern region. In 2018 and 2019, he strengthened the Rally2 field, winning several race victories and taking home the Rally2 absolute second place trophy last year. However, rally racing stopped for him this year.

The new plan was put together at the last minute, he could continue his career in the Swift Cup Europe, where he can also compete for the title of the international FIA rating with the new 1.4 turbo cars. All weekends he led the fields, winning races in a row or standing on the podium.

After Austria, Slovakia and the Czech Republic, the championship visited the season-closing weekend, which was held at the Hungaroring last weekend. The Hungarian driver was looking forward to his home weekend with a significant point advantage, but there were still three races left in the championship.

Although the time trial did not work out well, he only finished 5th, he still came in second in the first race. In the second race he repeated this, this time climbing from the seventh place to the second position and with that he already won the championship title. The third race in the pouring rain was just a formality, he drove without a stake, starting from seventh place and finishing second again.

” By the last weekend I already had more than one race victory advantages, I didn’t have to take any extra risks. I can honestly say, I could have fought for the victory in all three competitions at the Hungaroring, those who watched the live broadcast could see that. But now that was not necessary, I wanted to give back a scratch-free car to the guys after the weekend. It worked out so that I was able to get the results as well, and I even increased my point-advantage in the league!”, Tim said after the three races.

Tim finfished the year with a 34-point lead and became the champion. By winning the Swift Cup Europe championship, Tim already has six championship titles, perhaps he is most proud of this latest one.

” I wasn’t sure how will I be able to perform after skipping four years. The biggest problem was that I didn’t test, I essentially had to figure out the tricks of the car during races. Even in the season finale, there was a problem that I was able to ease by changing my driving style. If the tournament started now, I would focus much more at the one-lap pace because the time trials didn’t go well. But during the races, there were no problems. This is my sixth league title in my career, but I do not want to stop here!” – Tim summed up this year.

By gaining the championship title, Gábor Tim has clearly reached a crossroad, should he try to stay at the track race, or continue his unfinished story with the rally?

“If it was only up to me, I would clearly continue on the track, but of course the rally still appeals me. I would love to compare my strength with foreign competitors, in a more serious international brand cup, or TCR series. But the reality is that the chances are small, I can only hope that something comes together during the winter. I owe big thanks to all those who helped this year, to a handful of supporters, it would not have been possible without them!
Last but not least, thanks for the lots of strength that the fans have given this year. Though now they couldn’t be there personally for me, only on my social pages, but I got an incredible amount of encouragement from them. Thank you! ” – concluded Gábor Tim.