Home / English / Another double victory for Gábor Tim, this time in Slovakia

Another double victory for Gábor Tim, this time in Slovakia 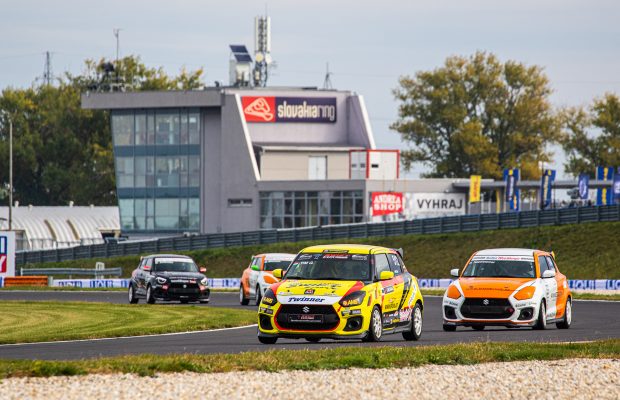 he fourth round of the 2020 Swift Cup Europe took place at Slovakiaring, where the international field visited for the second time this year.
This time the series were included in the WTCR program, which was led by Gábor Tim with a 21-point advantage before the weekend. Three races awaited for the field.

Gábor Tim will start the track racing again this year, though after the 2016 Skoda Octavia Cup championship title, he got out of the circuit and headed to rally, this year he could return to the place of his previous successes, to the world of track racing.

This year’s Swift Cup Europe field consists almost only of Austrian and Polish pilots, so Tim Gábor is the only Hungarian to compete race after race in the international rating. Winning four of eight races before the fourth round, he waited with a 21-point lead to continue.

He continued his proven tactics during the time trial, he ran a single measured lap, he knew he could not pick up a fight against teams of 4-5 anyway, he cannot run a lap alone like the other team’s pilots supporting each other. This single lap meant the third place for the Hungarian pilot.

“One lap was enough for me, because any of the first 2-3 rows on this track is good, there is plenty of space and time to overtake. The third place surprised me, I thought I was going to end up further back. This way, my tires will be in very good condition in the first race” Tim said after the time trial.

In the first race, he fought with his rivals until the fourth lap, eventually taking the lead. He kept the position all the way to the finish line when he was waved as the winner. But the race didn’t end yet!

”I had a fair and exciting battle with Banas, who is a very talented young Polish pilot. We reached the finish line, they waved us off. I waved at him, congratulating him on how hard he chased me until the finish line. Meanwhile I realised that my Austrian rival, Dominik arrives very fast and first leaves Banas behind than starts attacking me. That second I realized that the marshals are not waving the flags as they should at the end of a race. There was nothing else to do, I had to step on the accelerator again, and win the race one more time. I was never waved off twice as the winner during a race. I feel sorry for Banas, for being overtaken this way, even though he deserved second place.” Tim told the very strange case

For the second race, the first eight started in reverse order, so Tim waited for the start from the 8th place. This time he had to fight harder to get ahead. By the middle of the race, he had already taken the lead, which he did not let go until the end.

”It was hard to get ahead, but luckily I was able to fight myself to the lead. My car was probably the best at this race the whole weekend. Thanks to this I drove alone most of the race and won with a big virtue. This was a very important victory.” Tim analyzed the second race.

The third race wasn’t as good as the previous one for the Hungarian pilot. He started from eighth place again, regaining the lead, but they interrupted the race with a red flag due to an accident. He lost a few positions during the restart, but he was able to take back the lead. However, in the final lap, his championship rival, Dominik Haselsteiner crushed into him, Tim’s car broke down, it was damaged and he was forced to pull out from the race. Though his rival won, he got penalty, so he slipped back to the 10th place.

”I am dissapointed since Dominik was a very tough rival all through the year, it is obvious that we are the ones fighting  for the title. But it was a very upstanding fight between us that fits in track racing. I think he wanted the victory too much this time, and he didn’t only ruin my race but lost several points because of the penalty. But this is the past. The most importatnt thing is that I still lead the championship.” Tim closed the events of the weekend. Ater the fourth weekend, Gábor Tim increased his lead to 28 points in the championship; with two new race victories and further extra points for the fastest laps in each race. The Swift Cup Europe season-closing weekend on the 23rd -25th of October  will take place at the Hungaroring, where three races will be held again.