Home / English / Tim Gábor stood on the top of the table

Tim Gábor stood on the top of the table 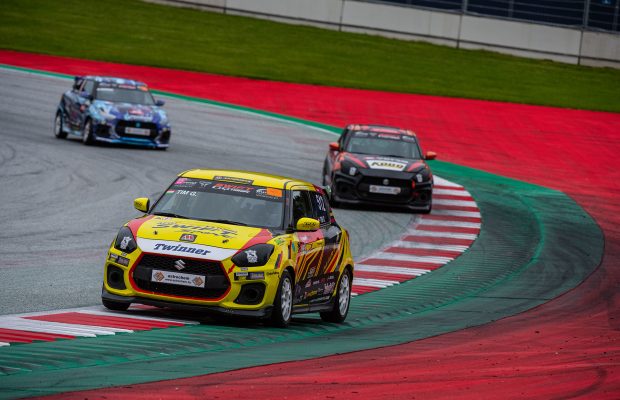 After the first weekend at the Hungarian Hungaroring, Tim Gábor arrived in second place in the championship for the Austrian Red Bull Ring, where the second round of this year’s FIA Swift Cup Europe was held. The field continued to grow on the second weekend, with nearly thirty cars waiting for the two races. Six-time champion Tim has taken the podium in both races and is leading the championship.

The program for the weekend in Austria was busy, with training sessions, a time trial and two races over two days. Although Tim led the qualifiers for a long time, in the end he was ahead of many, so he only finished in eighth place.

“Our tactics were bad. We were expecting more and more rain and we had a full rain setup. It was good at first, but the rain stopped so we basically “shot ourselves in our feet”. We made another mistake at the end, we got out to the box, just when the track was the best, and the opposers got ahead of us in a row. I am very disappointed, we could have won first place and the points coming with it” – Tim said sadly over the postponed opportunity.

Rain was also predicted for Saturday’s two races, but the rainfall avoided the field all the way when the racers were on the circuit. Tim started in eighth place in the first race and was able to get ahead at the cost of a big fight, eventually finishing second, but still standing on the podium as the winner in the international field.

“More and more junior drivers (under 16) are starting in the tournament, which is very good. Although they can’t get points in the FIA ​​championship rating, they still have to be fought on the tracks. In the first race I reached the third place, in front of me were Gergő Rácz and Attila Bucsi. They are both very skillful junior drivers in Norbi Mihelisz’s team, in the colors of the M1RA. I managed to beat Gergő with great difficulty, his car was very fast in the straights, it was hard to pinch him. Attila Bucsi had already driven a big advantage by then, I couldn’t have caught up, so I let go of his chase, I didn’t want to use the tires off. So if not on the track, but in terms of the league, I won the first race and took the lead in the league ” – Tim summed up the first race.

The second race on Saturday was on conversed grip and Tim was able to kick out from seventh place for the race. However, he was disadvantaged at the start and then the Safety Car drove to the track, so he lost another position. By the second half of the race, he already had the third place and was waved down there as well. The FIA ​​closed the evaluation, Tim got second place.

”The start went well, but I couldn’t turn into third gear, two of them went past me. Then they waved the yellow flag and the SC board. I was surprised to see that several opponents were overtaking, and even some of them drashed in the finish line. I just watched it like a movie, as if I was the only one noticing the yellow flags. They also passed by me during the Safety Car section, which shocked me, but I was confident that this would be punished. This did not happen. For the second half of the race I fought for the third place with Gergő Báldi, but his car was also very fast in the straight, I couldn’t attack. Third place is good, especially since it meant second in the league.” – Tim analyzed the second race.

After the second round of the tournament, the field is past five races, Tim Gábor took the podium in each race and is already leading the tournament with a 16-point advantage.

“It is good that we already have such an advantage, but I am a little worried about what I saw on the Hungaroring and the Red Bull Ring. Our pace in the straight is not good enough. I can’t approach some cars even in slipstream. Either the others have come up with something or there is something wrong with our settings. It is hard to drive these turbo cars in a way to reach the fastest speed-ups. We still have to work on this, because fast tracks are coming, Salzburgring and then Slovakiaring”. – Tim closed the weekend.

The FIA ​​Swift Cup Europe will continue on June 11-13 at the Salzburgring in Austria.